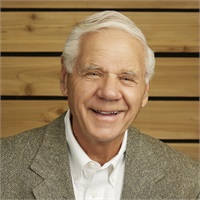 A founding partner of Agora Wealth Management, Roger has worked in the insurance and securities industries for nearly four decades. He was born in Brookfield, a small town in North Central Missouri. Earning a B.S. with a double major in Business Administration and Economics from Truman University, Roger has been in the financial industry since the mid-1980, holding Insurance and Securities License Series 6-62-63-65.

During his career, he worked as a financial analyst in the agricultural sector, experience that helps him with his mix of rural and urban clients. He brings a deep knowledge and oversight to Agora, with his long-term career emphasis in financial and market analysis.

In respect to Agora, Roger values the independence of developing their own approach to the market. This includes working with the client base of their choosing – and watching clients grow and prosper, in part as a result of his efforts.

At Agora, the partners made a conscious decision to limit the size of their client base to a manageable level, giving them the time and opportunity to know and understand their financial position and goals. Roger enjoys this process, bringing patience and attention to detail to every client interaction. He enjoys working with his clients and is always willing to go the extra mile to address issues as they arise.

Roger has been married for over 40 years and spent time outside the office with his wife, two dogs and two cats.